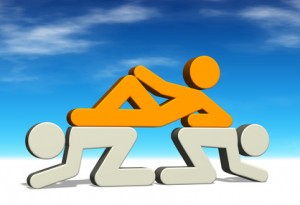 I usually start my day with a thirty-minutes run in the morning. Since I prefer running through the countryside it is not unlikely that I meet people walking their dogs. Sometimes — for reasons I cannot fathom –, these folks walk their dogs on the wrong side of the road (or rather country lane).

But let’s be fair. Even in Germany there is no law that requires pedestrians to walk on a certain side of a country lane; but what drives me nuts is that when they see me coming against them, most of them don’t dodge, let alone change to the other side of the lane — they just stay where they are. Almost all of them expect me to move, to overtake the wrong-way dog walkers.

Sometimes, just for the fun of it, I refuse to obey and stop right in front of them, which completely baffles them. Then, we stand there, deadlocked for a couple of seconds until I finally decide to give in.

I believe that what the dog walker subconsciously assumes is this: “the other one is faster, so he should move, it’s less effort for him than it is for me“. Even if this might be true in some cases, it is by no means generally true. Just because one is going faster doesn’t imply that doing something extra is easier for this person than for anyone else.

Probably, this is just all too human behavior, to get by with spending as little (effort) as possible. Especially members of sufficiently advanced societies expect that the strong protect and support (or at least are considerate of) the weak: “Those who can should support those who can’t“.

While I fully subscribe to this principle, at least in general, I have observed that this argument is often misinterpreted (misused) by slackers to mean “those who can should support those who don’t want“, an attitude that is totally unacceptable to me, neither in a society, nor in a company, and least in a team.

As another case in point, in 1913, French agricultural engineer Maximilien Ringelmann discovered that people — when working collaboratively on a given task (like pulling a rope) — excert a lot less effort than when acting alone. The bigger the group the bigger the tendency to hide behind others, to free-ride, to prefer taking over giving. Today, social psychologist call this phenomenon “social loafing” and it not only takes place in societies, but also within companies and teams.

In a company, the “Ringelmann effect” does not only impact day-to-day project work. For instance, if you call for a meeting, the more people you invite, the less people will come prepared and even fewer will make substantial contributions. Some “strategists” even exploit this fact by inviting a large party to a meeting where only a few protagonists actually make decisions. The large size of the group then gives an illusion of quality and broad acceptance of the decision, when in fact most people were just daydreaming. If there is one lesson to be (re-)learned from the Ringelmann effect it is this: “less is more”.

Here is my definition of teamwork: a group of self-motivated, self-directed individuals who share a common vision work together to achieve a common goal. If somebody needs support from a team member than never because one doesn’t want to do a task — only because one is temporarily unable to do the task oneself. Further, it is the responsibility of the supported person to keep the support to an absolute minimum and to learn and grow from it — not only to become independent of others but to be able to help others who are in need some day. The ultimate state of any team member is neither dependence, nor independence, but rather interdependence.

Making up for slackers, on the other hand, is not only a waste of time: sooner or later it drains the motivation and morale of even the most self-motivated people and encourages them to loaf as well. While I see a lot of value in so-called “B players“, I have zero tolerance for free-riders.