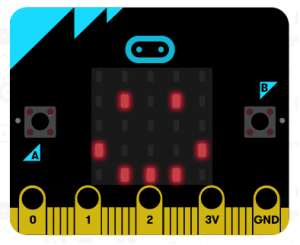 The BBC micro:bit, or Micro Bit, is a small embedded computer designed by the BBC for use in computer education in the UK. Every British schoolchild of grade 6 – 8 gets a Micro Bit for free. But before you become too envious: You can buy one for about 18 EUR—just do an Internet search to find a local dealer.

In my view, the Micro Bit is an excellent platform for learning programming since it sports many attractive features, such as:

But the coolest thing about it is that it comes without friction. The development environment is available online, which means that you can do all your programming in your favorite web browser—no need to install any software or drivers. The Micro Bit presents itself as a USB mass storage device onto which you just drag & drop your executable files.

Let me show you more of the Micro Bit’s features by dispelling some common excuses for not starting to write code for it today:

Excuse: I don’t possess a Micro Bit!
Response: You don’t need one. There’s a powerful simulator directly on the Block Editor coding environment. I highly recommend starting out with the Block Editor, anyway. Try it out now, before reading on! (Let’s put it this way: If I recommend something provided by Microsoft, it must really mean something, right?)

Excuse: I have no idea what to code.
Response: There are dozens of step-by-step tutorials and pre-built examples on the Block Editor page. Just click on “Projects” and then again “Projects” or “Examples.”

Excuse: Graphical programming sucks and is only for wimps.
Response: While I’m a big fan of text-based programming languages, I think it’s a good idea to toy around with the Block Editor for a while, just to familiarize yourself with Micro Bit’s features. Once you’ve learned what it’s capable of, you can do the rest of your programming in JavaScript or Python.

Excuse: I am (or want to become) a hardcore embedded coder and I’m not interested in high-level, wimpy JavaScript and Python programming.
Response: The Micro Bit is based on ARM’s Mbed IoT platform. There’s an online IDE on Mbed’s website that allows you to program your Micro Bit in C/C++, if you want.

Excuse: I live in a cabin in the woods and have poor Internet connectivity. Online programming is not an option.
Response: Once you’ve visited the Block Editor, you can access it from your browser even if there’s no Internet connection. But since you’re living in a cabin in the woods, you are probably a hardcore C/C++ coder, aren’t you? Well, thanks to the Yotta build system from Mbed, you can do command-line based builds and write your code in Emacs or vi, just as you please.

Excuse: I don’t have time.
Response: This is a lame excuse and I truly detest it. We’re all busy yet have plenty of time for things that are important to us. When we say, “I don’t have time,” we are really saying, “I’m a lazy bum and such a coward that I don’t dare confessing it to you.” Don’t get me wrong: It’s completely OK if you don’t like programming and have other priorities in life, but if you read my blog and you’ve made it this far, you should at least give it a quick try so that you can make an informed decision.

The Micro Bit does look like the perfect learning platform, doesn’t it?

In fact, there’s only one thing I wasn’t so happy about, at least initially: As far as I know, you can only use the simulator if you code in the Block Editor or JavaScript. My preferred Micro Bit language, however, is Python.

I scratched my head a bit and came to the conclusion that this was not really a problem, after all. Why? A simulator basically means manual testing, and manual testing isn’t really something we should ever aim for—it’s no fun at all. Instead, I want to use automated unit tests to ensure that my code behaves correctly even after the most minute change.

But there’s a catch: If you want to run Python unit tests on a host PC (not on the real Micro Bit device) you have a problem. Naturally, the ‘microbit‘ package, which provides access to the Micro Bit’s runtime and it’s peripherals, isn’t part of the standard Python distribution.

As a remedy, I set out to create a little Micro Bit playground, one that comes with a ‘microbit’ package containing mock objects for all the API objects that the original ‘microbit’ package offers. Here’s the essence of the ‘happy_sad’ example contained in the playground GitHub repository:

And here are the corresponding test cases using the mocked microbit.py module:

Just run ‘make’ to execute the test cases and ‘make install’ to transfer the code to your plugged-in Micro Bit. It can’t get any more convenient. No more excuses left!