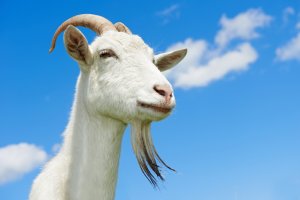 “The solution often turns out more beautiful than the puzzle.”
— Richard Dawkins

The goat problem, or Monty Hall problem, named after the host of the game show “Let’s Make a Deal” confuses the heck out of people. Here’s the original formulation from Marilyn vos Savant:

Suppose you’re on a game show, and you’re given the choice of three doors: Behind one door is a car; behind the others, goats. You pick a door, say No. 1, and the host, who knows what’s behind the doors, opens another door, say No. 3, which has a goat. He then says to you, “Do you want to pick door No. 2?” Is it to your advantage to switch your choice?

As counter-intuitive as it might seem, the correct answer is — yes, it is!

Everyone (unless they knew this problem already) including software developers and physicists that I confronted with this answer, shook their heads in disbelieve. They are, however, in good company. According to this Wikipedia article:

Many readers of vos Savant’s column refused to believe switching is beneficial despite her explanation. After the problem appeared in “Parade”, approximately 10,000 readers, including nearly 1,000 with PhDs, wrote to the magazine, most of them claiming vos Savant was wrong (Tierney 1991). Even when given explanations, simulations, and formal mathematical proofs, many people still do not accept that switching is the best strategy (vos Savant 1991a). Paul Erdős, one of the most prolific mathematicians in history, remained unconvinced until he was shown a computer simulation demonstrating vos Savant’s predicted result (Vazsonyi 1999).

Fascinating, isn’t it? The problem (or rather the solution) is so hard to grasp, yet it’s so easy to follow this simplified™ explanation:

Still not convinced? I wrote a little simulation in Python. Here’s the result after one million experiments: