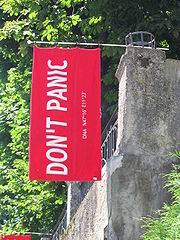 Douglas Adams, the brilliant author of “The Hitchhiker’s Guide to the Galaxy”. The idea is that you take your towel everywhere you go, as — according to The Guide — “a towel is about the most massively useful thing an interstellar hitch hiker can have”.

So me and some co-hackers thought it would be a good idea (and a great tribute) to go to Innsbruck on that day and try to find the exact location. Alas, it turns out that the camping-site doesn’t exist anymore — it has been replaced by a nursing home. Here are the exact coordinates, in case you want to go there as well:

On the train from Munich to Innsbruck I reread a couple of chapters from Douglas’ last book, “Salmon of Doubt”; one of the chapters is a transcript of a fascinating talk he gave in 1998, which is entitled “Is there an artificial god?” (transcript)(mp3).

The reason why I like this talk so much is that Douglas succinctly explains the origins and purposes of religions as well as how technology and scientific progress — he differentiates between “four ages of sand” — shaped our view of the world and religions. Very inspiring words… a must read (hear) for any carbon-based, ape-descendant, bipedal life form.

You have to bear in mind that this story happened in 1999, more than a year before the dot com bubble burst; senseless hiring of people was considered perfectly normal at that time.

I was working for a well-known consumer electronics company, developing mobile phones. Our CEO had a problem. The problem — which is not so uncommon among CEOs — was that the investors weren’t happy because the company didn’t sell enough handsets. So the boss went to sales and they claimed they couldn’t sell more because the development guys didn’t give them enough cool products — products the customers reeeeeelly wanted and even if they did, they’d finish too late; that is, they’d come out with a phone in March, missing the Christmas sales season by threeeeee month.

This procedure repeated a couple of times until our CEO freaked out. He went to our human resources manager and commanded him to “get more software developers, no matter what!”

Our job was to wear these (poor quality) t-shirts and attract potential software developers for our team.

This strategy was unbelievably stupid for many reasons. First, it emphasizes quantity, not quality. Second, it reads as if soft skills were more important than software skills. Last, it is very offending as it is based on the idea that good software developers stupidly fall prey to such bad HR campaigns.

Anyway, we got lots of candidates — many more than we could interview; our HR manager celebrated a victory. We, however, had to separate the wheat from the chaff and thus we developed programming tests that every candidate had to take.

One of the most successful questions was this one:

Write a routine that sorts an array of ‘n’ integers; write best-quality code.

Innocuously as it looks, this question has several good characteristics: it requires the candidate to actually write real code; since it has to be ‘best-quality code’ you can find out about his/her skills and quality standards. For instance, does the candidate

Every smart developer knows that there is no perfect sorting algorithm. The choice depends on many constraints — constraints that are not given in the problem statement and hence must be investigated. I remember one applicant commented along these lines:

[…] It all depends on how big ‘n’ is and whether we have write access to the array (that is, we can sort in-place). Are there any code/RAM restrictions? Depending on factors like these I would choose the best sorting algorithm from a text book. Unless no further information is given, I would use the sorting algorithm that comes with the standard library (e. g. qsort() in C, java.util.Arrays.sort() in Java). Since I know that you want me to write some code, I’ll implement an insertion sort algorithm which is easy to code and its O(n^2) behavior is acceptable for ‘n’ < 1000 [...]

Naturally, we made an offer to him, which he turned down a couple of days later. I guess he was scared of having to work with too many soft skills experts.