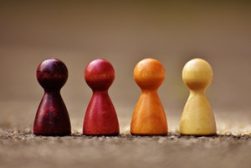 “If you put off everything till you’re sure of it, you’ll never get anything done.”
— Norman Vincent Peale

I once read about an individual who wanted to become a painter. But instead of painting, he spend a lot of time and money on finding the right canvases, brushes, and paints. He read dozens of books on painting, went to museums, studied the great masters but never got around to paint a picture.

Inspired by this story I coined the phrase “Non-Painting Painter” to label individuals who behave in such manner.

It’s highly likely that you will encounter non-painting painters in your career, so it’s worthwhile to shed more light on their attributes and behaviors, because it’s easy to misdiagnose them. It’s especially common to confuse them with a more extreme form, which I call the “Non-Painter”. Non-painting painters and non-painters have a lot in common (after all, they don’t paint), but while there is hope for cure for the former, all is lost for the latter.

Both, non-painting painters and non-painters are indistinguishable by looks, sight, or sound. You recognize them by their personality traits.

Both, non-painting painters and non-painters procrastinate, they are on the constant lookout for reasons to evade their primary task. This doesn’t imply that they are lazy — far from it! They spend a lot of effort on side issues. What they don’t do is get the task done that they are supposed to do.

To them, there is always more research to be done, more code samples to study, more design documents to write, more meetings to call for. They cannot start to code unless the coding standards have been approved by QA and to avoid this from ever happening, they permanently submit change requests. Then, some day, they hear about a new build system, programming language, software tool that need to be evaluated because this would “save us from so many problems in the future”.

Other characterizing attributes of both, the non-painting painter and the non-painter are that they are usually smart people with above-average social skills. They have a lot to say, seem to be well-versed with many contemporary technologies (at least superficially) as well as everyday topics. They are a naive hiring manager’s dream come true.

To qualify as a non-painting painter, it’s imperative that such an individual still possess a willingness and ability to actually perform the task they so eagerly avoid to do. The chief reason why they don’t perform is rooted in fear. Fear to make mistakes, fear to look stupid in front of coworkers. But contrary to the non-painting painter’s believe, it’s no shame to have little experience, as long as there’s a strong desire to learn and improve. In his book “The Passionate Programmer”, Chad Fowler goes as far as giving this advice: “Always be the worst guy in every band you’re in. – so you can learn. The people around you affect your performance. Choose your crowd wisely.”

But let’s now turn to the pathological, incurable sibling of the non-painting painter — the non-painter. Non-painters also don’t produce what they’re supposed to, they also waste time on unimportant, minute details and side issues. But contrary to the non-painting painter, they have neither the intention, nor the ability to get the job done. If that wasn’t bad enough, in almost all cases they go to great length to prevent also teammates from getting their jobs done, thus multiplying their own unproductivity. Why? Non-painters are in constant fear that well-performing teammates steal the limelight from them and expose them for what they are: freeloading charlatans.

A non-painting painter is still a painter, alas an inhibited one. My recommendation is to give non-painting people the benefit of the doubt and not by default label them as non-painters. If they don’t have the courage to speak about their fears, a senior developer should approach them and provide support and guidance. Just like Attaboys, non-painting painters often are diamonds in the rough. If they are open about their inexperience and strive hard to improve, they can turn into a valuable asset. However, if their productivity doesn’t improve, relabeling them as non-painters is more than deserved and non-painters have no place in the team.