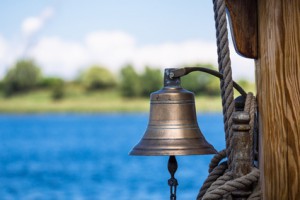 “Then later that night when the ship’s bell rang
Could it be the north wind they’d been feelin’?”

“The Wreck Of The Edmund Fitzgerald”
— Gordon Lightfoot

At my home, I’m using a Raspberry Pi as a watchdog (aptly named “Brutus”) for all kinds of tasks: burglar detection, network intrusion detection, and server monitoring, just to name a few. Still, most of the time, my watchdog hangs around, idling away. That’s not the way I like it, so I’m constantly on the lookout for new jobs that I can assign to Brutus, small or big.

My current plan is to create a little ship’s bell app that emits pleasing bell sounds every 30 minutes, just like it has been done traditionally on all ships since the 16th century: double-strikes for full hours and an additional single-strike for half an hour. But unlike civil clocks, ship’s bells don’t have dedicated indications for every one of the 12 (or rather 24) hours in a day; instead, bell patterns repeat every four hours:

In this table, a “2” denotes a double-strike whereas a “1” signifies a single-strike of the bell.

The code below is a first draft of my ship’s bell app. It is running as a thread, sleeping most of the time (so you can still call Brutus a lazy dog). When it wakes up, it checks the current local time and determines how many strikes are to be done (‘compute_strikes’). Afterwards, the thread puts itself to rest again. However, I didn’t want to wake it up every second to check the wall time — that would be too inefficient. Instead, I base the sleep time on the temporal distance between now and the next half hour (‘compute_sleep_time’) and sleep for half of this time before checking again.

Alas, my initial implementation comes with a bug and the bell doesn’t work as it is supposed to. Can you spot it? (The bug is in the algorithm — it has nothing to do with any Python language quirks, of course.)