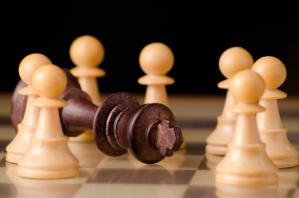 Considering all that fuss going on about agile processes these days, I sometimes wonder if this is yet another case of violating the first principle of the Agile Manifesto:

“Value individuals and interactions over processes and tools”

Given that there are so many books and consultants on the subject of Scrum/Kanban/Lean Product Development, isn’t it possible that people once again focus on processes instead of individuals?

While this hype is certainly annoying at times, the answer is a clear “No”. Agile processes care a lot about individuals and give democracy to the whole team. There is a clear concept of cross-functional, self-managing teams. Developers “pull” their work and decide (or at least largely influence) what and how to do it; work is not foisted upon them by a single dictator (aka. traditional project manager). In Scrum, the project manager role is filled by the product owner together with the rest of the team. This distributed style of project management is democratic, empowering, and very motivating for all members.

Yet, the most people-valuating “process” I’ve ever heard of comes from Tom DeMarco and Timothy Lister, mentioned in “Peopleware”:

1. Get the right people
2. Make them happy so they don’t want to leave
3. Turn them loose

To me, this is the best recipe for project success ever. If you’d follow this “process”, you wouldn’t need Scrum/Kanban/XP at all. If your team just consisted of smart and motivated people, everything else would follow. Why? Because as part of the team — and most importantly — you would also have the “right” leader, one who clearly says what to do and in what order. I’m not talking about a Gantt-chart/PowerPoint virtuoso, but a leader with the following properties and skills:

1. Charismatic, a born leader
2. Systematic, follows-up issues
3. Technically adept
4. Cares about the product and the team more than his/her personal career
5. Has the respect of upper management and the rest of the team
6. Shows that (s)he cares by inspecting and criticizing the main work product (the “Source Code”)

Alas, such gifted leaders are very hard to find.

Some claim that in real life benevolent dictatorship is by far the best form of government, much better than democracy, which is accompanied by frequent shady compromises. But also in real life, benevolent dictators are hard (if not impossible) to find and that’s why democracy was invented. So despite of all its shortcomings, democracy is the best government system in practice.

In some sense, you can view the appearance of agile methodologies as a result of our industry’s inability to find the “right” leaders. Yes, there are training and certification programmes for project managers, but in my honest opinion, they don’t help a lot; if anything, they focus on the “systematic” part, yielding people that spend a lot of time on upfront planning, estimation, and project reporting (“defending”) to upper management. They not only waste their own time but also the time and motivation of the rest of the team.

Until our trade has developed a system for breeding benevolent leaders (like the guild system did hundreds of years ago with the apprentice/journeyman/master model), I vote for agile software development and the software process democracy that it gives me.