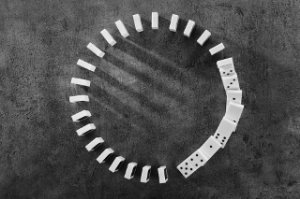 In systems programming, ring buffers are ubiquitous. Like regular queues, they’re first-in first-out data structures but contrary to classic queues they’re fixed in size and don’t grow dynamically. This is especially important in real-time contexts where time and space determinism is paramount.

In today’s circular episode I want to show you my go-to ring buffer implementation. I like it, because it’s short and decently efficient. I deliberately used only basic C++ syntax, so it should compile fine with even compilers from the previous millennium (i. e. C++98):

A common problem that you face when implementing a ring buffer is discriminating between empty and full states, as in both cases the head and tail index point to the same location. I solved it by allocating one extra element, which might waste a little bit of space but makes the code easier on the eye and probably faster compared to the alternative approach which requires you have to maintain an extra boolean flag.

When the buffer becomes full during an add operation (head == tail), the tail index is immediately advanced by one, thus dropping the oldest element. As this all happens within the add method, from a ring_buffer user’s point of view the head index is only ever equal to the tail index when the ring buffer is empty.

Contemporary compilers will replace the potentially costly modulo operation in the advance helper method with an AND operation for buffer sizes that are base-2 numbers. However, keep in mind that the advance method uses the internal buffer size (BUFSIZE), which is one greater than the requested ring buffer size (N), so this is most likely an efficient ring buffer: